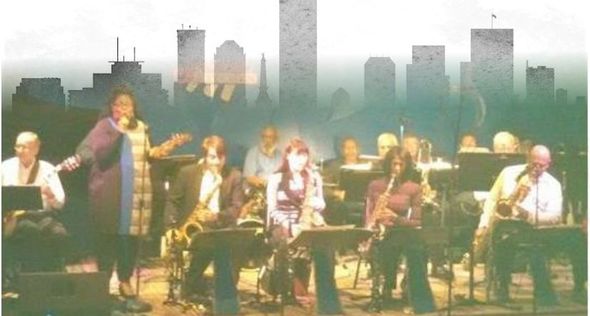 This is the largest ensemble in Urban Renewal Jazz, and the foundation for all our other activities.  Unlike other big bands in the area, the Urban Renewal Big Band performs all its own arrangements for a performance that you cannot get anywhere else.

The Urban Renewal Big Band has its roots in the Jimmy Coe Orchestra, which was a band dating from the 1960's, born of the Count Basie tradition performing modern jazz as well as popular music loved by generations. Following Coe's death in 2004, there was a void in the central Indiana area of bands playing modern jazz of the urban tradition.

In 2009, trumpeter Cliff Ratliff and singer Larry Greene decided to form a band that would fill this void. Thus the Clifford Ratliff Big Band was formed. This group has rehearsed regularly and performed frequently from 2009 through 2018.  In 2018, Cliff is moving to the East Coast to be closer to family and to start a new musical journey.  While Cliff promises to return frequently and be with us on the bandstand, this change caused the band to think about our mission. The mission is mostly about the music and keeping it relevant for the public. Therefore, we are adopting the new name Urban Renewal Big Band, which we think nicely represents who we are and what we want to do.  Jimmie Coe Jr. continues as band manager, Rudy Finnell continues as Artistic Director and the band personnel continues essentially as before, other than a hole in the trumpet section that can never be filled.

For a more complete history, see our blog article.